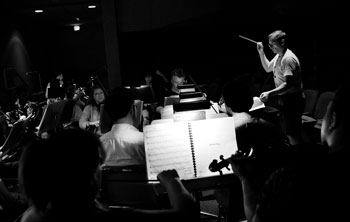 Jeffrey Jones-Ragona's association with GSA dates back to 1994, when he led the Society's production of H.M.S. Pinafore. He has led nearly every annual production since then and was officially appointed as Music Director in 2005, when Ralph MacPhail was appointed as Artistic Director. His work with the Society has garnered critical praise and several B. Iden Payne award nominations. In 2003 he received the B. Iden Payne award for his musical direction of The Pirates of Penzance.

Jeffrey is also the founder of the choral-orchestral ensemble Musica Ecclesiæ, and has also served as the Artistic Director of the Capital City Men's Chorus, the Director of Music at the Cathedral of Saint Mary, and as Conductor of the Makheilah at Temple Beth Israel.

He has taught on the music faculties of Drake University, St. Edward's University, and Southwestern University. He has over a dozen commercial recording credits and as a soloist has toured throughout North and South America. Jeffrey received his DMA in Conducting from the University of Texas in 2006.